A Conversation about James Lee Burke

I invited my friend and fellow writer, Craig Terlson, to have a conversation about James Lee Burke, a fine crime/suspense author with a substantial body of work. Burke has sold a ton of books, but he’s lesser known than giants like Elmore Leonard, Raymond Chandler, James Ellroy, or Michael Connelly, but when he’s firing on all cylinders Burke’s writing ranks with the best of them.

Burke is from the Texas-Louisiana gulf coast area, which shows in his writing. He’s written nearly forty books. Most of them feature former cop and occasional detective Dave Robicheaux. He’s also written a handful of novels concerning the Holland family, including four about Billy Bob Holland and four featuring Billy Bob’s cousin Hackberry Holland. Burke has won several Edgar awards and was nominated for a Pulitzer.

It was Craig who first introduced me to Burke, when he recommended Black Cherry Blues, a Dave Robicheaux novel. Now, Craig is like my Canadian doppelganger: we both write crime/suspense fiction, appreciate all things noir, love and play the blues, adore good food, wine and an occasional bourbon. Craig’s excellent Fall in One Day was released a year ago by Blue Moon Publishers. Set in 1973 during the Watergate hearings, the story concerns fifteen-year-old Joe Beck, who takes it upon himself to locate a missing friend. It’s a great read, and I can’t recommend it highly enough.

MC: So, Craig, let me start this off by asking why you first recommended to me Black Cherry Blues? Why that particular book?

CT: Because I wanted to turn you onto Dr. Pepper. (Robicheaux’s favourite beverage.) Okay… some years ago I was told that some of my work had echoes of James Lee Burke in it. This was before I had even read him. I was told to start with Black Cherry Blues by another writer, whose name I forget. I didn’t read much crime fiction at the time and was more into the literary genre—not realizing that’s really what Burke writes. Anyway, I still remember reading it in bed, and my wife seeing the lurid cover, saying, “That’s not the sort of book you usually read.” But I knew that cover aside, this was a whole ‘nother take on the crime fiction genre. The prose was lyrical, poetic even, the structure complex, the main character haunted, and it was a just a damn fine book. I recommended it first to you because it was where I started.

MC: Well, I loved the book. I was a bit startled when I read it that I hadn’t heard of Burke before. It was like discovering Scorsese or Hendrix for the first time: I really should have known about this guy! Anyway, “poetic” and “lyrical” are good adjectives. There’s a richness to Burke’s writing: His descriptions are so full and evocative, I was captivated from page one. Plus, as you suggest, his characters are three-dimensional. They’re living, breathing people you care about. Now, just to get this out of the way, you and I have discussed some weakness in Burke’s writing. Can you elaborate on that?

CT: I am not sure it’s a weakness, or a question of where modern readers are at. If you look at crime fiction from the 50s and 60s, like John D. MacDonald, there are some similarities to what Burke is doing. I’m talking about his tendency towards long descriptions, and plots that seem to meander a bit. Myself, I love settling into a book that places me in an environment that I can taste—but a lot of readers today (if the bestseller list is accurate) want fiction with a lot of narrative drive, and too much description or even character development slows things down too much. When you read reviews of Burke’s work you see a polarity of those who love the descriptive language, and those that ask, “where the hell is the story?” Me, I love the language.

MC: That’s a great way to put it. Yes, that’s the weak spot I was referring to. I think some of Burke’s writing needs a bit more editing. I’d like to see some of his plots meander a bit less—but without sacrificing any of his superb, rich descriptions of things or his fully-human characters. Another aspect of that richness, and this goes back to what you were saying about his work being lyrical and poetic, is his ability to dig deep into his characters’ lives, thoughts, emotions, their environment and comment on it in profound ways. This is really risky stuff. It could easily come off as overblown or purple, but Burke is able to pull it off masterfully. 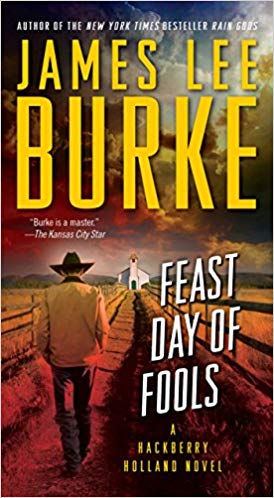 I’ll confess that I like Burke’s Hackberry Holland novels a little more than I like the Robicheaux novels. The former are set in Texas, and Burke captures the landscape and the life there in a way that to me is reminiscent of Cormac McCarthy. Here’s a taste of Feast Day of Fools:

SIX HOURS LATER, Pam Tibbs and Hackberry Holland drove down a long dirt track, twenty miles southwest of the county seat, to a paintless gingerbread house that had a wide gallery with a swing on it and baskets of petunias and impatiens hung from the eaves. The landscape looked particularly strange in the sunset, like terrain that might have been used in a 1940s movie, hard-packed and rolling and biscuit-colored and notched with ravines, marbled by thunderheads and the reddening of the sky and dissected by lines of cedar fence posts that had no wire on them.

Lightning rods flanged each end of the house’s roof, and a windmill in back was ginning furiously, pumping a jet of water into an aluminum tank where three spavined horses were drinking. A white-over brick wall surrounded the house a hundred feet out, like the walls at the Alamo, the top festooned with razor wire and spiked with broken glass. The wood gates on three of the walls had been removed and pulled apart and the planks used to frame up two big vegetable gardens humped with compost, creating the effect of a legionnaire’s outpost whose defense system had been rendered worthless.

“What’s the deal with this place?” Pam asked.

“Miss Anton bought the house from a secessionist who took over the courthouse about twenty years ago. After she moved in, I think the Rangers were sorry they locked up the secessionist.”

Hackberry was sitting in the passenger seat, his Stetson over his eyes. “It’s a courtesy,” he said.

I chose this at random, but it well-illustrates, I think, the power of his descriptions and his ability to capture the true feeling of a place. There’s also the fun and intriguing back-and-forth between the Sheriff and his Deputy, Pam Tibbs. I’m reading this book for the second time now, and every evening I savor a few pages. It’s like sipping good whiskey. Is there a favorite passage from Black Cherry Blues you’d like to share?

CT: – Wow, there is so much wonderful stuff in there – good whiskey is right, and I get the McCarthy parallel. I wouldn’t be surprised if Cormac was an influence on Burke. When I read through this I think about the fresh details. Burke’s descriptions are always rich, and sure some go on too long, but I so admire, “biscuit-colored and notched with ravines, marbled by thunderheads…” They are alive on the page and give, as you say, the true feeling of place.

I picked up Black Cherry Blues again this week – forgetting how chilling the opening was. I had a thought that the haunted suspense of a character being gunned down in a bedroom had gothic overtones to it. The idea of the “sublime” especially in gothic fiction, where romance, terror, and death are all woven together and you feel every crack in the wall and raindrop outside, is evident in Burke’s novels. His writing is so attuned to the senses, and if you lean into it, you are immersed in a world where everything matters.

The opening paragraph of Black Cherry Blues is a fine example.

Her hair is curly and gold on the pillow, her skin white in the heat lightning that trembles beyond the pecan trees outside the bedroom window. The night is hot and breathless, the clouds painted like horsetails against the sky; a peal of thunder rumbles out on the Gulf like an apple rolling around in the bottom of a wood barrel, and the first raindrops ping against the window fan. She sleeps on her side, and the sheet molds her thigh, the curve of her hip, her breast. In the flicker of the heat lightning the sun freckles on her bare shoulder look like brown flaws in sculpted marble.

That is a fantastic setup for the next line:

Then a prizing bar splinters the front door out of the jamb, and two men burst inside the house in heavy shoes, their pump shotguns at port arms.

I mean… just try to stop reading at that point.

MC: Yes! You’re “immersed in a world where everything matters”—that’s beautifully put! And quite accurate. So, on that eloquent note, I’d say it’s time to wrap this up. Thanks so much, Craig, for engaging in this appreciative discussion, and thanks especially for turning me onto Burke. His work is truly inspiring.

CT: Loved doing this Mark, thanks for asking. It’s made me want to dive back in and read more of his amazing work. He is a fine example of how expansive the genre of crime fiction is, and how beautiful writing is beautiful regardless of genre. Burke continues to be an inspiration in my work, and I’m delighted that you have found him the same.