Nietzsche and the Philosophers

“This volume proposes a major reassessment of Nietzsche’s position within the history of philosophy. Each chapter―written by some of the foremost scholars in the field―offers a novel interpretation of the role that specific thinkers, from ancient Greece to the nineteenth century, played in shaping Nietzsche’s subversive and critical perspective on what philosophy is meant to be…Far from breaking with the philosophical tradition, Nietzsche thus emerges as a genuinely modern thinker that seeks to write himself into this very tradition, highlighting its contradictions and possibilities.”―Christian J. Emden, Rice University, USA

The Philosophy of Spike Lee

“A valuable contribution to the fields of both philosophy and film studies.”—Kimberly A. Blessing, Buffalo State College

The Philosophy of the Coen Brothers

“The Philosophy of the Coen Brothers offers a very smart, provocative, and stylishly written set of essays on the films of the Coen brothers. The volume makes a convincing case for reading their films within a wide array of philosophic contexts and persuasively demonstrates that the films of the Coen brothers often implicitly and sometimes explicitly engage with central issues in the history of western philosophy from Plato and Aristotle to Kierkegaard, Nietzsche, Heidegger, Sartre, Baudrillard, and MacIntyre.” Michael Valdez Moses, author of The Novel and the Globalization of Culture“

The Philosophy of Martin Scorsese

“Conard has compiled another jargon-free and entertaining collection of essays that clearly and concisely define traditional philosophical thought―this time through the lens of Scorsese’s films. . . . Be the reader a Scorsese enthusiast or a philosophy student, this collection serves as an excellent interdisciplinary resource.” ― A.F. Winstead, CHOICE

“This collection will be particularly valuable to philosophy scholars interested in ethics as well as film and cultural critics.” ―Matthew Schultz, Film Criticism―

The Philosophy of Neo-Noir

“Is Neo-Noir anything more than film noir in technicolor? Taking up such latter-day classics as Chinatown , Blade Runner , and Memento , this volume explores how contemporary filmmakers have taken up the challenge of classic film noir and broadened the genre. In this analysis, even the pastel shades of South Beach take on a dark coloring in Miami Vice . These probing essays locate what is neo in Neo-Noir and thus define it as a postmodern genre.”―Paul Cantor, author of Gilligan Unbound: Pop Culture in the Age of Globalization

“This collection will serve as a terrific interdisciplinary guide through the chaotic, intriguing world of postmodernist thought as it relates to film and philosophy.”―Choice 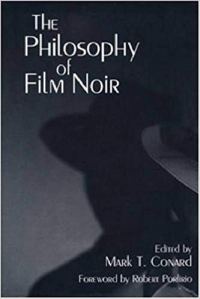 The Philosophy of Film Noir

“The essays work both as solid primers into philosophy, stretching from Aristotle to Schopenhauer, and as lucid excursions into the genre’s dark, mean streets. . . . A fascinating, readable, and provocative book. . . . Highly recommended.”―Choice

“An intellectually seductive, hard-boiled romp through a world of moral murkiness, femme fatales, and desperately lonely protagonist.”―Eric Bronson, editor of Baseball and Philosophy

“The collection aims to achieve two goals: to introduce genuine philosophical problems and film noir characteristics, while providing sufficiently in-depth discussion that those familiar with either philosophical methods or film noir will not find the material too elementary. Although facing a difficult task, Conard has put together a collection that succeeds in both respects.”―Intertexts

“Dense and intriguing, the book suggests noir is best perceived as a slightly warped mirror held up to contemporary society.”―Publishers Weekly

“…a good mix of academics and entertainment, and dedicated Woody Allen fans will find this a fascinating read.” — Back Stage, October 29, 2004

“Those who stick with this book will experience their next Woody Allen encounter at a much deeper level.” — Foreword, January 1, 2005

The Simpsons and Philosophy

“The Simpsons and Philosophy is a great place to begin any program in Simpsons studies. A serious look at a funny subject.” — Mark I. Pinsky, author of The Gospel According to The Simpsons

“The authors in this volume really immerse themselves in The Simpsons, and the result is this absolutely unique book. Go for it!” — Professor David Carrier, Carnegie Mellon University

“What a great book! The chapters are by turns fun, profound, and instructive. You’ll be surprised at what wisdom lurks in these pages.” — Tom Morris, author of If Aristotle Ran General Motors